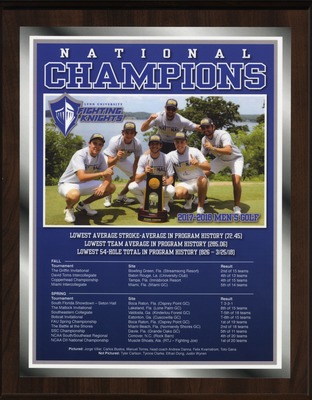 Muscle Shoals, Ala. - Lynn University's fourth-ranked men's golf team had been in this familiar situation all too many times, four to be exact, but this time Carlos Bustos sank the winning putt on the 18th green to beat top-ranked West Florida 3-2 and secure the 2018 NCAA Division II National Championship. The NCAA title is the first for the men's golf program, and second overall following an NAIA crown in 1996. Lynn has now won 24 national championships in school history.

The Fighting Knights had previously finished runner-up in 2017, 2015, 2013 and 2011, with the first runner-up finish coming on the same golf course they would win on today, the Robert Trent Jones at the Shoals Fighting Joe course.

A day earlier, Bustos knocked-off First Team All-American Jorge Garcia but on this day, the sophomore out of Santiago, Chile, went toe-to-toe and beat three-time First Team All-American and 2017 National Player of the Year Chandler Blanchet. Trailing by as many as three, Bustos took a one-shot lead on the 17th green with a birdie and watched as Blanchet bogeyed 18 to give Lynn the title.