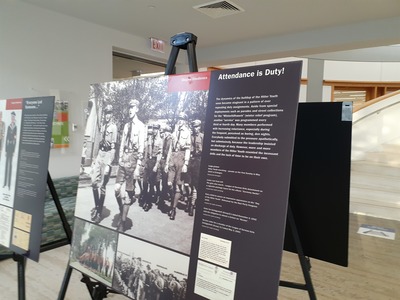 Traveling exhibit from The Florida Holocaust Museum at the Eugene M. and Christine E. Lynn Library (on the 2nd-floor landing)

"Tempted, Misled, Slaughtered -- The Short Life of Hitler Youth, Paul B" on on exhibit in the 2nd Floor Landing from February 22, 2021 – March 19, 2021. The exhibit is a collaboration with Professor Sindee Kerker DJCG 300A course on The Nuremberg Trials.

The exhibit, through a series of photo panels, shows the rise of the Hitler Youth, which lured children and their parents by taking children on camping excursions. While other youth organizations were outlawed, the Hitler Youth organization sprouted a number of clubs that would eventually serve the military’s purposes, including a Hitler Youth Signal Corps, motorcycle units, a Hitler Youth glider program and shooting and marksmanship contests. The exhibition was created in partnership with the Nuremberg Documentation Center and is circulated by The Florida Holocaust Museum, St. Petersburg, Florida.