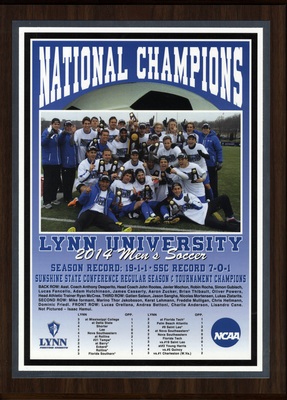 Louisville, Ky. – Two goals moments into the match shell shocked the No. 1 team in the nation and Lynn University's third-ranked men's soccer team withstood a late offensive push to defeat Charleston (W.Va.) 3-2 to claim the 2014 NCAA Division II National Championship. This is the 23rd national title in school history and the fifth for the men's soccer program, including the second national crown in the last three years.

Lynn's men's soccer team has now claimed NCAA titles in 2014, 2012 and 2003 and NAIA crowns in 1991 and 1987 and joins the women's golf team with five total championships. Both programs trail women's tennis, which has six titles.

Chris Hellmann scored twice, giving him a nation-leading 28 goals and 69 points while adding his 10th game-winner, in being named the tournament's Most Outstanding Offensive Player. Jason Sangha was honored as the tournament's Most Outstanding Defensive Player for the second time in his career. Joining Hellmann and Sangha on the all-tournament team was Nicolas Mortensen and Lukas Zlatarits.