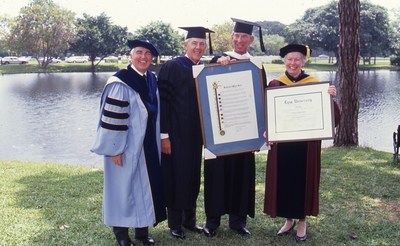 President Donald E. Ross, Colette Mahoney, Chairman of the Board, Ray Osborne, Trustee, present the honorary Doctor of Humane Letters to Nathaniel Pryor Reed at the Lynn University Commencement on May 2, 1992.

After serving in the U.S. Air Force, Nathaniel Pryor Reed began his civilian career as a manager of the family real estate and hotel business. His concern with the environment soon steered him into public life and eventually led him to serve five Florida governors. Over the years, he has been involved in every aspect of Florida's environmental problems. He has served on numerous local and national environmental organizations.